Inspiring Golf at Every Turn


The Club at Pradera's spectacular 7,200-yard championship layout was designed by renowned golf course architect Jim Engh to blend harmoniously with its pristine natural surroundings in the shadows of the Rocky Mountains. Mature trees frame gently rolling hills and immaculately-maintained greens on this bewitching golf gem, which combines breathtaking aesthetics with unpredictable cleverness. In many cases, the holes pay homage to Ireland’s wispy ragged Irish links, with some areas completely untouched. In others, picturesque ponds and rugged wetlands create a more modern look and feel. The result is an astonishing collection of visually stunning, strategically diverse holes that are as imaginative as they are fun to play for golfers of all ages and abilities.

Golfers can hone their skills on Pradera's expansive golf practice facility, featuring an all-grass driving range and a short game area including putting and chipping greens and a practice bunker. Members and their guests enjoy music throughout the facility that jump starts a great round of golf.  Golf instruction by top PGA teaching professionals is available for golfers of all ages and skill levels, along with a year-long series of golf instructional clinics, junior golf camps, and both league and inter-club play for men, women and juniors. 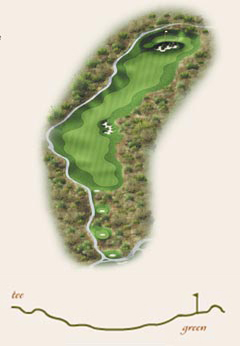 No. 1 is always the hole where you want to get a nice start. Here, it's a short par-5 that gives you a flavor of what's ahead...what's going to tie the whole course together. The unique bunkering style is evident on this straight-forward hole, which sets the tone for a spectacular, truly memorable experience. 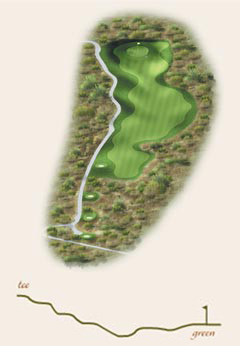 The par-4 No. 2 immerses golfers in the Irish concept. After hitting out onto the fairway, there's some intrigue; when you search for the green for your second shot, you can't see it. You're not quite sure what is happening. An unsettling feeling arises: The course is not going to be so easy after all. But that's a good thing; if you create a golf course that nobody complains about, then possibly you haven't created anything remarkable. The second shot into the green is actually quite easy and forgiving...it just doesn't look like it from out in the fairway. The unpredictability and cleverness of this tricky gem is something golfers will want to play over and over in order to fully appreciate. 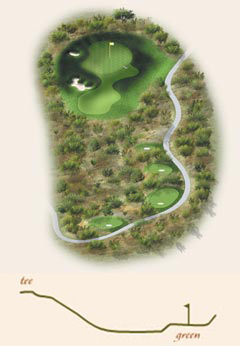 Next is a little par-3 that's got some nice bunkers up short of the elevated green. The bunkers, set away from the green, make depth perception a bit puzzling, causing golfers to pause and think about what they'll do. 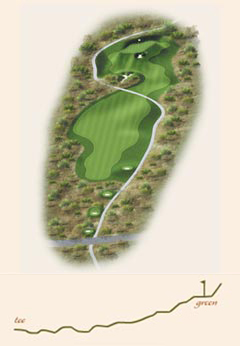 Next is a big, bad, long par-4 with a large landing area to hit to off the tee - so you can let it rip. The second shot is uphill, and you're going to need to get that all the way up to the green, which is surrounded by bunkers and a chipping area. It's one of those very long holes with its greatest visual appeal around the green. 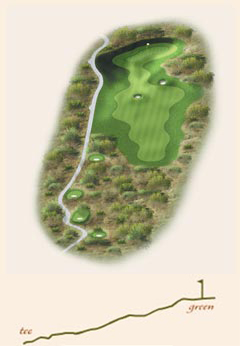 This is a short par-4. You want to hit it on up in the fairway, and then it'll be a very short shot up to the green, depending on how long your tee shot is. This hole changes character every day. If the flag's in front, you'll be able to see the bunker, green and flag. If the flag is back, you may not be able to see it. If you want to see the flag, play the hole to the left of the fairway pot bunkers. This can be a little bit dangerous off the tee, but it lets you see in. Long hitters can try to go over the bunker. As with most par-4's, there are a bunch of options. It's gonna be fun to play; we're down in the valley, and now we're starting to work our way up top. 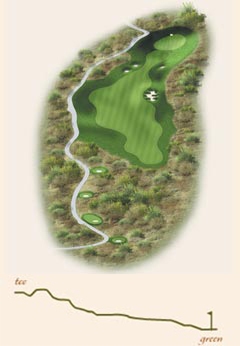 The par-4 No. 6 is up on the bluffs looking out over the community, with picturesque views of the scrub oak that populates Pradera. The first downhill tee shot golfers encounter, the hole features an elevated tee shot, hitting down into the valley - which is surrounded by scrub. From there, you hit pretty easily up to the green, as the bunkers are placed short of the green. 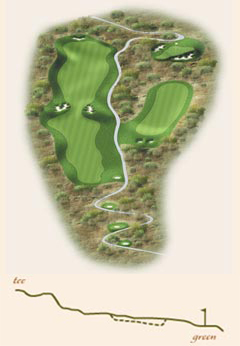 The par-5 No. 7 has alternate fairways, enabling golfers to approach this hole differently every time they play. With the exception of the green and some bunker work, this hole was virtually untouched and remains in its rugged native state. Standing up on top of the hill, this is the place to blast way. It's all carry up to an elevated green with your second shot. If you play the hole properly, the second shot should be just 80-90 yards. This one is very fun to play, and golfers will want to play it often to enjoy the variety of route options. 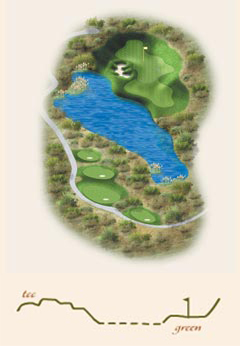 No. 8 is an intimate gem carved into a hillside, with a pond adjacent to the small, linear green. A small fairway bunker adds just a bit of intrigue on this unique, very beautiful par-3. 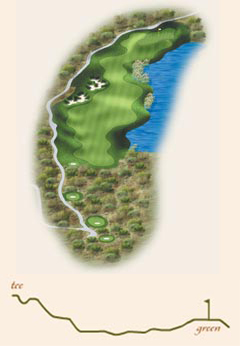 The par-4 No. 9 follows along similar lines as No. 8 - an interesting blend of modern and Irish links with a rolling fairway and the noses of cattails in your line of vision. The hole has a layered look, with a variety of different elements coming into play. 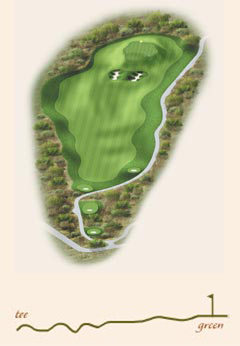 No. 10 is a dramatic par-4 - a great way to start the back 9. A nine-foot "mound" in the middle of the fairway requires a bit of strategy, as the tee shot will roll to one side of the mound or the other. The fairway is wide, but channels balls down into one of the smaller side areas from where golfers approach the green. The green has two finger bunkers set side-by-side, with a big mound in between them, to obstruct things a little bit and keep you from really blasting away. The green is elevated, with a plateau that falls away on all sides. There's a bit of the Irish look here, along with some quirkiness - making for an adventurous and very playable hole. 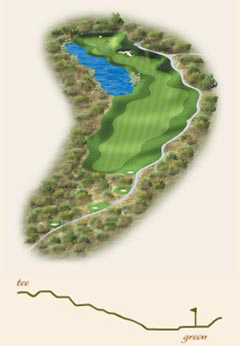 The par-4 No. 11 returns to more of the "modern linksy" feel. A big downhill tee shot flies into a big landing area, before the real test comes when you hit the green - which features its own daunting armour, with a lake that goes all the way along the left side of the fairway, which falls to the right...forcing golfers to carry to get to the green. This hole will definitely get the heart rate going. 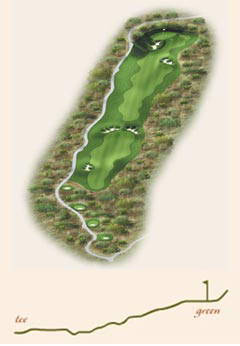 No. 12 is a par-5 that plays uphill all the way from tee to green. There are bunkers short of the landing area, so you have to decide either to play it up short, or try to fly over them. Then, there are bunkers that squeeze you even more on your next shot, so your vision will be only through a small corridor looking toward the green. The green has some strong backing to absorb long carry shots, with long flowing lines at various points of action. Very difficult bunkering catches your eye, and probably a great deal of balls as well. 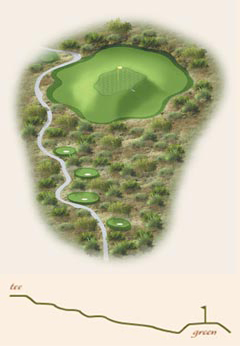 Situated down in a wash, No. 13 is a long par-3 at roughly 230 yards and presents an interesting contrast to other holes. The hardest par-3 on the course, it features a high, prominent "volcano-style" green which is both visually stunning and tricky. The green is large, and if you don't get the ball onto the green, your ball will fall roll 10 to 15 yards from the green and down into a little pocket. It won't be the easiest shot in the world from down there. For most of the holes, kick everything in toward the flag; however, this one is going to pull everything away from the flag if you don't hit right up onto the green. 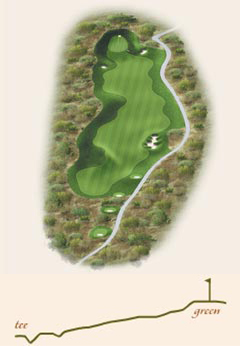 No. 14 runs up the side of a hill, which has a ridge on it. It's more like a rolling meadow with some staggered bunkers that force you to choose your carry. It'll be a long second shot into the green, which is carved into a nook. It's going to be an interesting, long par 4: If you hit it up near the green, it'll kick in and probably go on. If you miss these areas, you'll end up on the wrong side of that ridge, with a really difficult shot to recover. No. 14 is one of the tougher holes on the back 9. The combination of 13 and 14 in a row is going to be very challenging for most players. 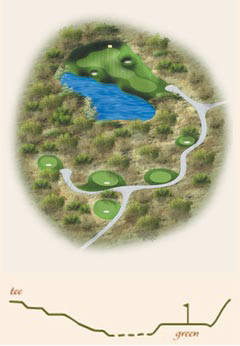 No. 15 is a very sexy, intriguing par-3. Although it is only 182 yards from the back tees, the hole is carved into a hillside which resembles a little valley, with wonderful proportions to it. A linear green matches the natural contours, and there is a small pond in front of the green that has some wetlands and cattails. The tees are all placed into the hillside, without much disturbance to the existing land, which is probably the most forested area on the entire course. No. 15 will be a favorite hole of many, due to the placement of the tee; you can see Pikes Peak when you look down south toward Colorado Springs, offering spectacular views and an exhilarating challenge. 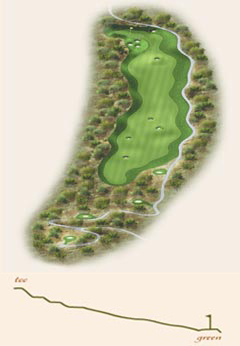 No. 16 is a big, long 600-yard hole with a huge fairway off the tee and a lot of downhill roll. Because it's such a huge fairway, there are four pot bunkers in the landing area, so it's going to be tough to pick your line. You have to hit it and hope you don't go down into one of those bunkers. You also have to decide whether you'll go far enough off the tee to go for the green in two, and risk the bunkers, or play up short. There's another pot bunker with the second shot. Now, it all plays downhill, so it's going to become a pretty docile hole, everything considered. You may see the flag if it's in the front part of the green, but you may not see the green itself. It's a nice par-5 hole, and no gimme. 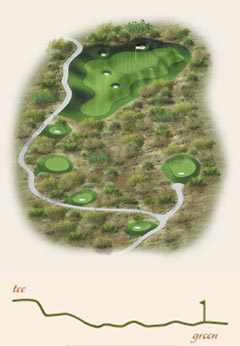 No. 17 is another linksy par-3 where shot-making will be at a premium. You have to decide whether you'll try to carry the green, which will be some shot, or play it out to the left, and then bring it in easy. If you do the latter, you're flirting with a row of pot bunkers - so there are some decisions to be made here. The good news is, if you're on the proper tee, you're probably going to be able to carry it all the way to the green, because as you keep bumping up the tees, you don't have that much carry. No. 17 is a good example of players choosing to make it tough or easy on themselves. 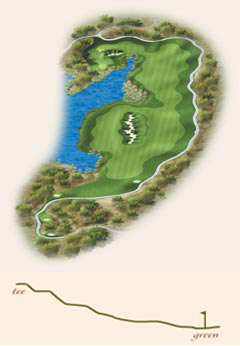 No. 18 is the granddaddy finisher - a par-5 where you have another opportunity to choose between alternate fairways, with a long, deep bunker running between the two. You can get there in two if you choose to go to the left fairway, but there's water on the left and that big bunker to the right. To get on the green, you also have to carry water with your second shot. This way takes two good shots. If you want to play the alternate, longer fairway to the right of the big bunker, it's easier and safer, but takes three shots to the green - and you'll have to knock the second shot through a narrow gap. Get through that, and it's an easy shot into the green. The option is yours; each presents its own unique challenges. Either way, it's one heck of a finishing hole, and you'll be ready for something cool to drink in the clubhouse.